What is Phoslock?
Phoslock is a natural product, produced from modified bentonite clay and developed by the Land and Water Division of Australia’s CSIRO (Commonwealth Scientific and Industrial Research Organization) to significantly reduce the amount of Filterable Reactive Phosphorus (FRP) present in the water column and in the sediment pore water of a water body.

How does Phoslock work?
When Phoslock is applied to a water body as a slurry, it moves down through the water column, up to 95% of the FRP is rapidly removed and adsorbed onto the surface, forming an insoluble complex within the clay structure. As the Phoslock settles on the sediment-water interface it forms a ~1 – 3 mm layer. This layer of Phoslock is capable of adsorbing the FRP from the sediment layer on its available binding sites. Once the FRP is bound to Phoslock, it is no longer bioavailable.

Is Phoslock environmentally safe?
Yes. During the development of Phoslock, extensive laboratory testing was carried out on a range of test species using the United States Environmental Protection Agency toxicity testing criteria. The CSIRO Centre for Advanced Analytical Chemistry assessed acute and chronic toxicology on a variety of aquatic species with no toxicity effects observed. Since then, the product has received approvals from NICNAS and the DECC in Australia. It can also be imported and sold in Europe under the EINECS system. Extensive toxicity tests were also conducted by independent organization in New Zealand and Australia. Data compiled from independent and in-house sources is available upon request.

What is Eutrophication?
Eutrophication is a process whereby water bodies, such as lakes, estuaries, reservoirs or slow-moving streams receive excess nutrients that stimulate excessive growth of aquatic plant and algae. Eutrophication is caused by an increase in nutrient levels; usually phosphorus and nitrogen and can result in visible cyanobacterial or algal blooms, surface scums, floating plant mats and benthic macrophyte aggregations. Concentrations of phosphorus of < 0.1 mg/L are sufficient to cause a cyanobacterial (algal) bloom. The decay of this organic matter may lead to oxygen depletion in the water, which in turn can cause secondary problems such as fish kills and liberation of toxic substances or phosphates that were previously bound to oxidized sediment.

Phosphate released from sediments accelerates eutrophication. Some lakes are naturally eutrophic, but in many other cases the excess nutrient input results from: (1) anthropogenic origin such as municipal wastewater discharges; (2) industrial effluents; and (3) runoff from fertilizers and manure spread on agricultural areas. Nutrient enrichment seriously degrades aquatic ecosystems and impairs the use of water for drinking, industry, agriculture and recreation.

What are the sources of nutrients?
The natural sources of phosphorus and nitrogen are the small amounts that occur in rainfall. Most of the sources are imported from terrestrial systems or are recycled within the aquatic system. External anthropogenic sources increased nutrients and accelerated the eutrophication.

Examples of anthropogenic sources are: fertilizers or nutrients runoff from agricultural land or urban sources, nutrient rich waste such as effluent discharge from sewerage treatment plant etc. Sediments play an important role in the overall cycling of nutrients in freshwater system such as lakes and reservoirs. Molecular diffusion and the convective transfer process through the sediment-water interface control internal loading of bio-available P and N in the overlying water, makes a significant contribution to the total nutrient budget in the reservoirs and plays a critical role in the overall nutrient cycling, and supporting the production of blue-green algae. Bottom sediment acts both as a source and a sink for P and N. The concentrations of soluble reactive phosphorus (SRP) or filterable reactive phosphorus (FRP) in the sediments of a reservoir are usually 3 – 8 times higher than those in the overlying water.

Nutrient regeneration from sediment or benthic efflux of inorganic nutrients could supply up to 55 – 100% of estimated nitrogen demand and 30 – 70% of the phosphorus requirements for the initial growth of algae. In large shallow lakes, phosphorus dynamics are generally influenced by physical processes such as wind-driven sediment re-suspension, at time scales from hours to years. 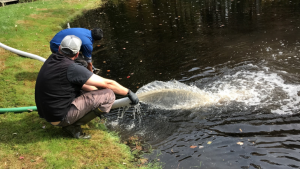 Why Phoslock is a better innovative option to treat a water body?
Phoslock is a better innovative option because it is a novel, non-toxic, permanent solution to control and manage algal blooms. Phoslock was invented and developed by Australia’s most prestigious research organization, CSIRO through 10 years of research and development. Phoslock works through limiting one of algae’s limiting nutrients, phosphorus.

Phoslock removes bioavailable phosphorus from the water and continues to react with the phosphorus which is released from the sediment or present in the water column. Phoslock does not have the disadvantages of the other traditional methods of algae bloom control.

The water will become milky for a few hours after application until the Phoslock settles on the bottom of the water body. The FRP will reduce and can be calculated to fall to below measurable concentrations depending on the amount of Phoslock applied to the water body.

Phoslock staff will provide a quotation for each water body without any charge. The quoted cost will depend on the client but generally includes delivery to site, application and pre and post treatment testing. The cost will vary based on quantity of Phoslock, size of water body, accessibility and location of site and whether application takes place from shore or a boat or a conglomeration of these methods.

Where is Phoslock being used and in what applications?
Phoslock is being used in Australia, New Zealand, Canada, Indonesia, Malaysia, Singapore, Taiwan, China, Korea and many countries around Europe such as Germany, Netherlands, Belgium, Poland, Hungary and UK.